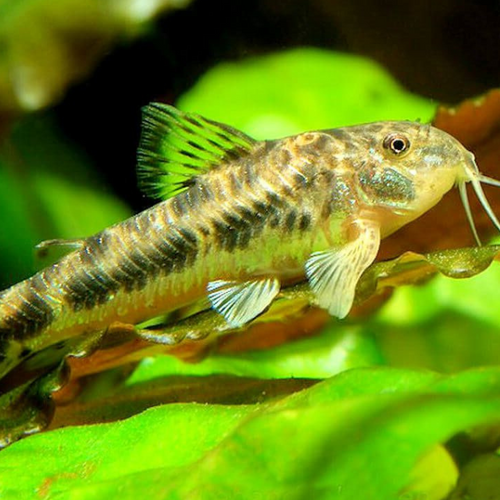 The Aspidoras genus is a close cousin of the corydoras, and when you look at these guys, it is very easy to see the similarities. Aspidoras are essentially what you would get if you took a cory, and stretched it out into a more tubular shape. The aspidoras have heads which are longer than corydoras, at least relative to their bodies. They also never get as deep-bodied as their cousins the corydoras. True to their genus, Aspidoras spilotus looks just like a Corydoras habrosus, if you were to stretch it out and flatten it. It has very similar spotted markings that sometimes merge into lines, and a loosely connected lateral line which can commonly be seen broken up into a series of dots. They also have a beautiful bronzy green iridescence when they catch the light properly, and this iridescence is especially striking on their gill plates, where it sometimes looks like a lime green blush.

These fish are collected near the northeastern coast of Brazil, in river drainages in Brazil’s Ceará state. Due to this being on the exit end of the river, these fish are quite adaptable to different water conditions, including some harder water, up to around 200ppm. You still ideally want to keep these fish in slightly acidic conditions, but these fish also readily adapt to a neutral or even slightly alkaline aquarium setting. These fish will also graze on natural biofilm as well as a bit of loose algae here or there, so make sure that your tank is well seasoned and has some natural biofilm growing on surfaces before the introduction of these fish. These nano catfish will also appreciate the addition of branches and leaf litter in order for them to hide a bit easier, as well as for extra surface area to graze on. These fish will also appreciate the intermittent addition of higher protein foods such as bloodworms or brine shrimp. These little guys are usually found in temperatures in the 70s, but they will tolerate temperatures a bit higher or lower for short periods of time.

When choosing tankmates for this fish, you have quite a bit of free reign. These aspidoras are armor plated, and their genus name even talks about this. Their name comes from the greek words aspis which means shield, and dora which means skin. This means that they are capable of standing up to many tankmates, even ones on the aggressive side, but definitely stay away from things that would try to eat one of these fish in a single bite, as they also have spines on their dorsal and pectoral fins, which are venomous. These catfish are a great addition to any community tank, since they do not get very big, and they are also gregarious, and with a lot of their own kind they will school around in midwater, and are a very different catfish to have at the bottom of your tank as well. These fish ship individually bagged.