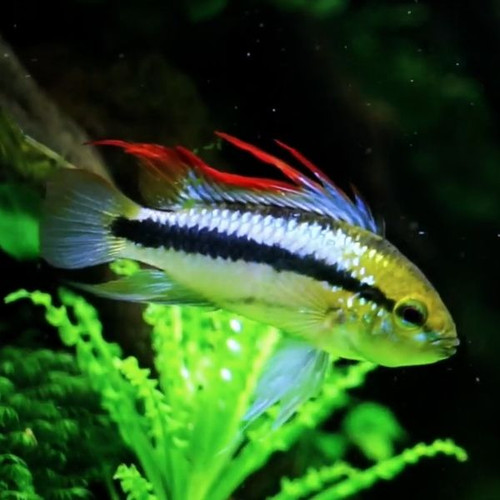 Apistogramma trifasciata was originally called “Apistogramma trifasciata trifasciata”, and was collected with another species called “Apistogramma trifasciata maciliensis”. Since, the latter has been renamed Apistogramma erythrura, and this beautiful three lined cichlid has dropped its second subspecies title. Originally collected in the rio Paraguay, it was later collected from as far south as central Argentina. This is regarded by many as one of the most beautiful apistogramma, and once you have some that have settled into your tank, it is easy to see why. The males of this species have stark black lines on a bright white base color, which converge around the eyes, and travel along the length of the fish. The fin rays tend to have extremely long filaments, and are tipped in red, whereas the body gets a metallic, sometimes almost neon  blue which shimmers above the white. Many also have a yellow mask which spans the eyes, sometimes extending to the area just beyond. All of the colors are so dense they appear to have been painted!

When these fish are collected from the wild, they want to go into soft water, but our tank bred European specimens are much more suited for different water parameters, and the most important factor is having a well cycled filter that is able to handle the fish that you add in. As with many apistogramma species, this one can be fairly messy when it eats, and you may want to have some other things in there to clean up after the food scraps that they may leave. Acidic to slightly alkaline water is fine for these fish, and water hardness up to about 250ppm will still allow them to thrive. They do appreciate the addition of leaf litter and branches, both as a place to hide as well as a place to graze off of when there is no other food being offered. The addition of plants is also appreciated by these fish, for the same reason as the botanicals, but with the additional factor of consuming extra waste, as well as contributing to the oxygenation of the water during the daytime.

When considering tankmates, as mentioned, maybe a small corydoras species to clean up after the food scraps that this fish may create, such as the habrosus, or maybe the rarer hastatus, which both stay less than 1½ inches long, and will not compete with or harm the dwarf cichlids which are the center of the show. You could also consider keeping them with some smaller tetras above, in order to encourage them to come out of hiding. You may also keep a harem of these, but males of this species tend to be fairly aggressive to each other, and you may want to keep a close eye on your group for a while in order to remove subdominant males which may be losing fights. These fish ship individually bagged.