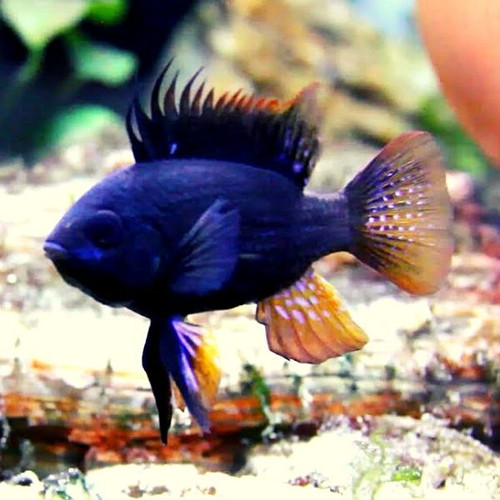 Mikrogeophagus ramirezi is quite a famous fish already, and in recent years there has been a new color variant which has the whole world abuzz, and that is the german black variant! There are many people who have gotten lower expression specimens of the fish which may have seven been crossed back to normal german blue bloodlines, diluting the black pigmentation a lot along the way. The black rams are a domestic creation, made from generations of selective breeding, and so breeding them back to a more “simple” color form may be necessary to achieve a more robust fish, but should not be sold with the moniker that has generated so much hype. A true german black ram is completely black, with some flakes of blue iridescence on the fins, although even that is sometimes undesirable. The fins are all an ombre black to orange fade, and sometimes there is a very bright electric blue around the lips. Due to the black overlay in pigment, it can be difficult to distinguish male from females of this color form, and so if your goal is to breed them you may want to get a larger group of them, and separate specific fish out as they pair off. This fish was originally collected from the drainage of the rio Orinoco in Venezuela and Colombia, this color form is already so far removed from the wild that the wild water conditions matter very minimally when trying to keep this fish in your aquarium.

Because this fish has been bred in an aquarium for multiple generations already, they should be much more adaptable to tank water than any wild fish would most likely be. The most important factor is going to be a well cycled aquarium which is able to process the amount of waste that your fish produce, keeping the aquarium clean chemically. Also keep in mind that these fish really like it warm! This species of fish does not tend to do well in aquariums in temperatures lower than 80 degrees. At this temperature the dissolved oxygen in the water can quickly be depleted, so having something to help oxygenate the water is a very important safeguard.

The temperature also presents some difficulty in both choosing some potential tank mates for them, as well as choosing plants if you want to put them in a planted aquarium. In terms of fish, most tropical fish that we keep in the hobby do not need temperatures that high, but are perfectly comfortable. One popular pairing of fish is discus, since they are another fish that really prefers a warmer water temperature. Plants on the other hand prefer to be a bit cooler, and you may have some difficulty maintaining plants long term in temperatures that high. Give it a try though, with faster growing stem plants being more likely candidates to do well over time, especially those which are naturally found in warmer climates, like Brazil. Small rams ship bagged together, while large rams ship individually bagged.

Please Note: Live Animals delivered with UPS and FedEx are 100% covered by our Dead-On-Arrival Guarantee Coverage as disclosed in our Terms & Conditions. Live Animals delivered with USPS are not covered by our Dead-On-Arrival Guarantee Coverage. For complete details, please read our Terms & Conditions prior to ordering.